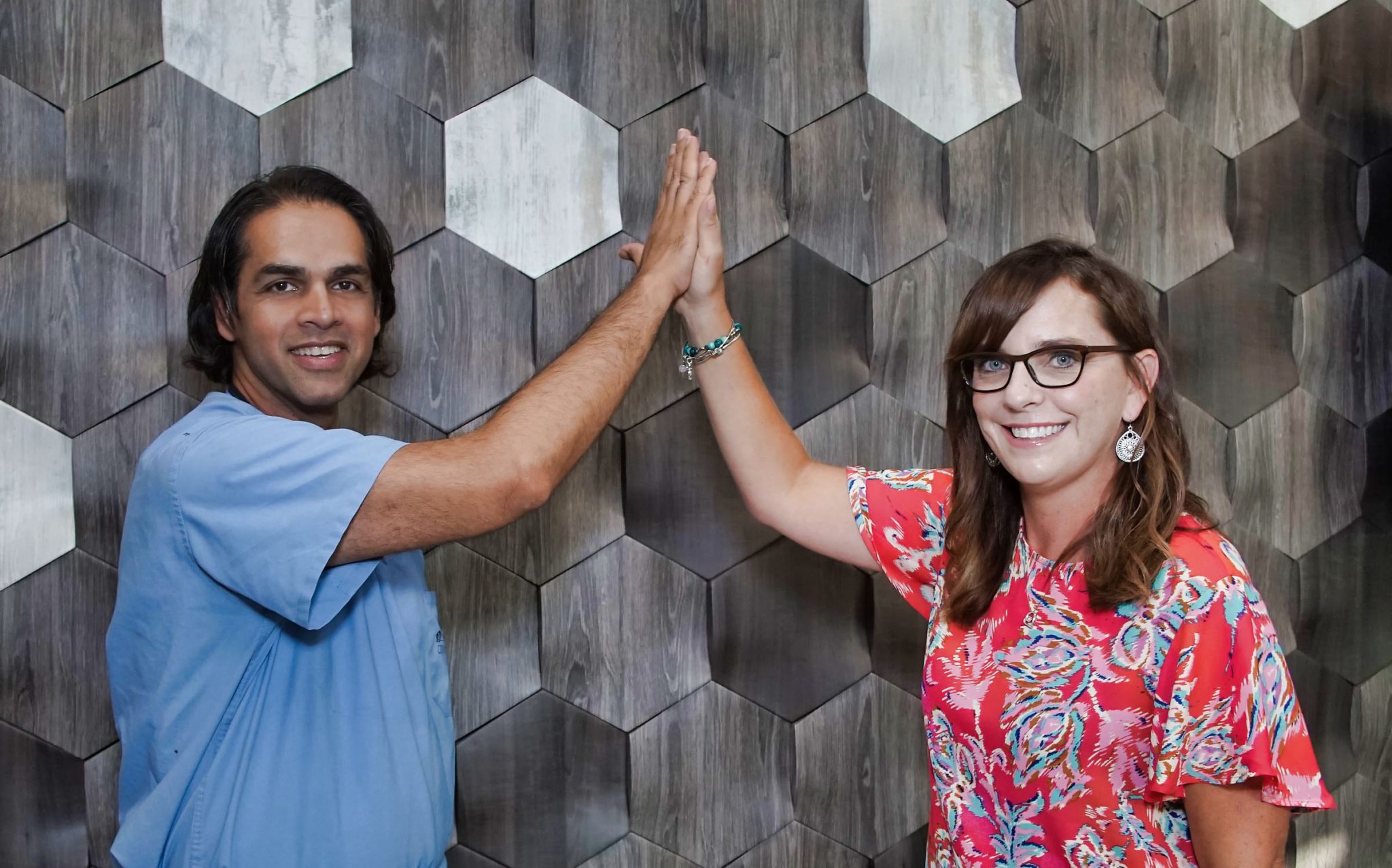 My son Luke is my little hero, Having him may have saved my life, If not for delivering him, I might not have known I had ovarian cancer until it was too late. When I was first diagnosed with cancer, it was John and my 10-year anniversary, and I was so sick. Thanks to Dr. Sharma, Dr. Kassar and everyone at Northwest Cancer Center, this year we are not only celebrating our 20th wedding anniversary but also my being 10 years cancer-free.

On Sept. 30, 2009, at 32, Kristine delivered a healthy baby boy, the third of three children. Her pregnancy was uneventful but for her back going out when she was on vacation. She had a couple of ultrasounds, she said, and even one that was 3-D.

“My delivery was super easy, with no complications, and the baby was fine,” said Kristine.  But after Luke’s regular vaginal birth, she was still swollen. Her doctor attributed it to a delay in her uterus shrinking back to normal size. Kristine said she was having “insane” pain; on a scale of one to 10, it was a 15.

Ten days postpartum, she still looked pregnant and was still in terrible pain. Kristine’s doctor performed a vaginal exam and sensed that something was wrong. An ultrasound revealed a mass, and a CT scan determined it was a tumour, but only removing it could confirm whether it was benign or malignant. A blood test showed protein/tumour markers that were super high in number and quite suspicious.

Surgery had to be delayed for a bit, as Kristine needed time to heal from her pregnancy and delivery.

As the pain progressed to unbearable, Kristine was rushed into emergency surgery on Saturday, Oct. 10, 2009. She was referred to Dr. Sharma, a gynecologic oncologist and surgeon, but the urgency of her condition prevented her from meeting him far in advance. In 2008, Dr. Sharma had started a practice in Northwest Indiana to help patients receive care locally for gynecologic cancers. He brought his expertise and experience from academic medical centers in Chicago, where he continues to practice.

Kristine and her husband, John, met Dr. Sharma for the first time in the pre-op holding room on that Saturday, and they were both quite impressed.

“He came in, shook our hands, made us feel very comfortable and explained what he was going to do,” said Kristine. “I could tell he was really looking out for my best interest.”

Dr. Sharma removed a mass that was 25 centimetres wide, weighed 71⁄2 to 8 pounds and was the size of a basketball. He said the tumour was hemorrhagic, which caused anemia and pain. Kristine said she was told that because she had been pregnant, hormones from her pregnancy fed the tumour, and it grew larger.

John, her father and a good friend, were in the waiting room when Dr. Sharma emerged from the surgery with the report that Kristine had Stage 3 Ovarian Cancer. Her mother was at Kristine’s home caring for her 7- and 5-year-old daughters, Brooke and Taylor, respectively.

Dr. Sharma had previously spoken to the couple about whether they intended to have more children. When they said they did not, and he found cancer in the mass, he performed a full hysterectomy, including fallopian tubes and ovaries and removed lymph nodes in the upper abdomen where cancer had spread.

Kristine was then referred to Dr. Kassar at Northwest Cancer Center, where she began a chemotherapy regimen.

“Kristine’s cancer is called ovarian dysgerminoma, or germ cell cancer, which is very rare,” said Dr. Sharma. “The type of chemotherapy that was used was bleomycin, etoposide, and platinum or a BEP regimen, and it’s a long-established treatment that was originally used for testicular cancer.”

“Dr. Kassar was amazing,” said Kristine. “He treated me like I was his own sister and really looked out for me. I was also really impressed at how all the doctors at Northwest Cancer Center really communicate with each other.”

Kristine’s mom had come for Luke’s birth and ended up staying four months to care for the children, while Kristine went through chemotherapy.

“The day I started chemotherapy, my tears came flowing, and the nurses at Northwest Cancer Center were at my side immediately, hugging and consoling me,” she said. “They were wonderful and were like family. They really have to have big hearts to deal with all of the patients and families. I can’t say enough about them.”

While she was very sick during her two months of chemotherapy, with emergency room and hospital visits, infections, an allergic reaction to her treatment and a sepsis scare, there was one thing that bothered Kristine the most.

“I couldn’t take care of my new baby for the first four months of his life,” she said. “It was very painful to go through this, and a good friend helped me release my stress and anxiety through prayer.”

Kristine’s checkups went from every two months to every six months and included CT scans and chest X-rays because this type of cancer can spread to the lungs or cause pulmonary fibrosis. After three to four cycles of chemotherapy, Kristine’s cancer markers declined greatly, Dr. Sharma noted.

“Her pregnancy helped to detect this cancer sooner, as Kristine was already under a doctor’s care,” said Dr. Sharma. “This also made her more self-aware of the distention in her belly.”

Gynecologic oncology is a highly specialized field of medicine that focuses on cancers of the female reproductive system, including ovarian, uterine, vaginal, cervical, and vulvar cancer. Dr. Sharma is recognized as a leader in this field. He continues to bring his expertise to Northwest Indiana, and, since he is one of the “best of the best” and can be found at Northwest Cancer Center; it means that patients don’t have to go to Chicago for this specialized care.

“When I was first diagnosed with cancer, it was John and my 10-year anniversary, and I was so sick,” said Kristine. “Thanks to Dr. Sharma, Dr. Kassar and everyone at Northwest Cancer Center, this year, we are not only celebrating our 20th wedding anniversary but also my being 10 years cancer-free.”