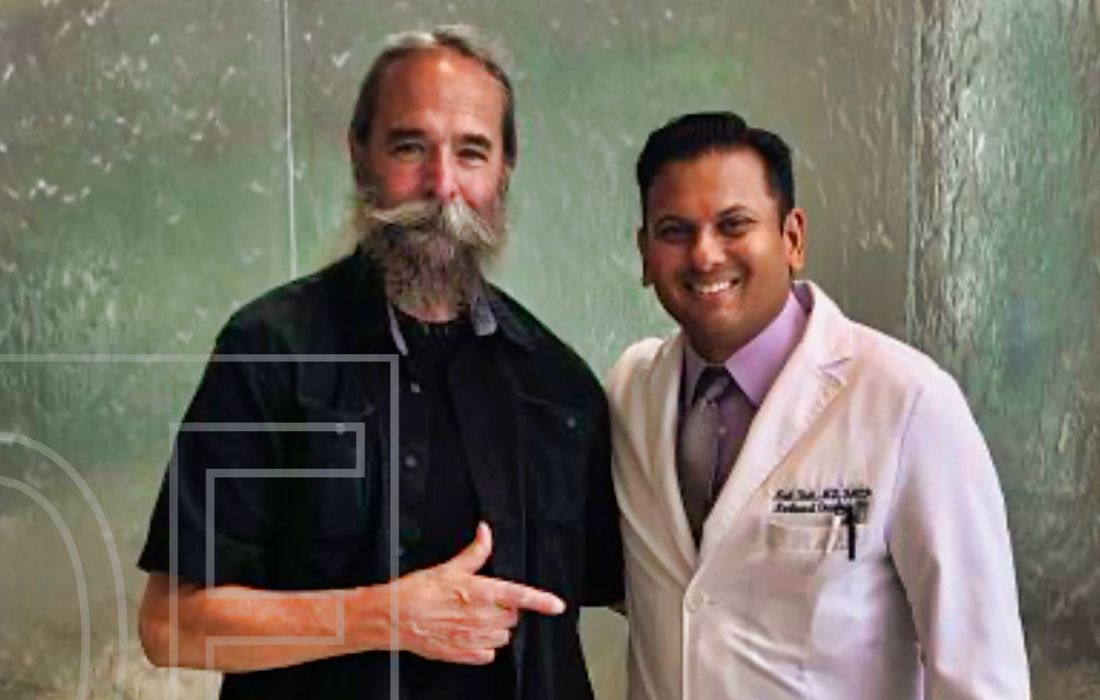 Dr. Shah saved my life, I’ve got him and everyone at Northwest Cancer Center to thank. It’s truly a ‘one-stop-shop’ and everyone was very professional and treated me well. When people hear ‘cancer’ they’re already digging a hole, Today with medical advancements, it’s so much better.

“Early detection is so important. Don’t be afraid to take care of yourself; it doesn’t make you less of a man,” David Spaniol of Munster implored. “Better to be a smart man than a dumb, dead man.”

David’s warning arises from his own experience with throat cancer and how he ignored the symptoms. The usually jovial, outgoing, 66-year-old retired machinist nearly died four years ago because he didn’t listen to his body. David had not been a smoker but worked in heavy industry his entire career. Early on there were no environmental health regulations.

In July 2015, David noticed a lump in his throat but attributed it to too much alcohol. He stopped drinking, thinking that would help, but about six months later, he began coughing up blood. His insurance coverage was poor, so he didn’t visit a doctor.

One day, David’s brother called and expressed concern about how he sounded. His brother came to his home and confirmed that David didn’t look well, so he took him to the emergency room. Results from blood work showed he would have died in his home within three weeks had he not been taken to the hospital. He was suffering from malnutrition, losing 60 to 70 pounds and his oxygen level registered at only 30%.

By the time David sought treatment, it was an emergency situation. He went to see Ear, Nose and Throat specialist Dr. Dennis Han at Community Hospital in Munster, and a scope revealed that his airway was 90% blocked.

David was taken in for emergency surgery and given a 50-50% chance of survival. The surgeon performed a tracheostomy, or an opening in the neck, to place a tube into David’s windpipe to allow air to enter his lungs. A feeding tube was inserted into his stomach through his abdomen so David could receive nutrition.

It was at this time that David met Dr. Neel Shah, an oncologist at Northwest Cancer Center in Dyer.

Dr. Shah explained that head and neck cancers can happen in smokers and non-smokers and noted that David was diagnosed with Stage 4A throat cancer, which is very advanced.

“The first month was pretty shaky,” said David. “Dr. Shah kept me in the hospital for a month so I could get the proper care.”

“The cure rates with EGFR are still high, even without chemotherapy,” noted Dr. Shah. “The prognosis has greatly improved with targeted therapy and now immune therapy is approved for recurrent and metastatic head and neck cancer. Though David didn’t have recurrent cancer, the number of cancer survivors from throat cancer has increased as cure rates have gotten better, and David is proof of that.”

David is pleased that even after throat cancer, he still has his voice.

“Today, chemotherapy and radiation are equally as effective as surgery, so we didn’t have to remove David’s voice box,” Dr. Shah said.

After his tumors shrunk, David underwent surgery to remove some lymph nodes and “dead” tumours. His latest PET scan showed no metastasis, and his kidney function has returned to normal. David visits Dr. Han every few months for scopes.

“The highest chance of recurrence is two years, and once someone is two years out, we only need to see them once a year,” Dr. Shah said. “Surveillance protocol after remission is to catch cancer as soon as possible if it’s going to come back.”

Dr. Shah emphasized that all the physicians work as a team, including surveillance with imaging and doctor visits. The best advantage is everything can be done locally in Northwest Indiana, so patients don’t need to go to downtown Chicago for curative treatment.

As for David, he said he gives Dr. Shah “glowing recommendations.”

“Dr. Shah saved my life,” David said. “I’ve got him and everyone at Northwest Cancer Center to thank. It’s truly a ‘one-stop-shop’ and everyone was very professional and treated me well.