Dr. Peggy Pritchett’s relentless optimism and unbreakable spirit carried her through 3 breast cancer diagnoses and multiple myeloma, and it’s those same characteristics that led her to write a book detailing her cancer journey. Through her book, My Breast Cancer Story: The Anatomy of Tears, she inspires others by sharing her story and giving hope to those going through similar circumstances.

She was referred to Dr. Peter Tothy by one of the leading radiologists in NWI. She had her mammogram and the doctor found the cancer in her chest wall. Once the biopsy showed cancer, she made two referrals - one was to Dr. Bleza, and the other was to Dr. Tothy at Northwest Cancer Centers’ Crown Point location. The radiologist followed the recommendations by adding that if she had breast cancer, these are the two doctors she would want treating her.

“I felt an overwhelming feeling of dread and sadness. When she found the cancer, I knew it was going to be very serious. It was a life or death situation in my mind, and from there I chose life,” she said.

After successfully treating and monitoring the second diagnosis with success, she felt confident about what the future had in store.

In 2019, she was diagnosed by Dr. Tothy with metastatic breast cancer in her right lung, in addition to a diagnosis of multi myeloma. From there, Dr.Tothy immediately referred her to Dr. Jayesh Mehta, a renowned hematologist in Chicago.

“The multiple myeloma was the most life-threatening so he sent me to a specialist for this. I was treated at Prentice Women's Hospital in august 2019 in preparation for the stem cell transplant that was to take place January 27th of 2020. Dr. Mehta had hoped the stem cell transplant would eradicate both the multiple myeloma and cancer in my right lung, but it did not. I’m doing much better now and my numbers are being managed and carefully monitored by Dr. Tothy and the team,” she said. 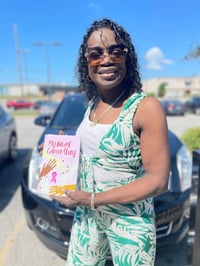 Dr. Peggy says having a strong belief system is what gets her through adversity and stay strong. “For me, that system is Jesus Christ. I am a member of the Hobart Church of Christ and affiliated with a number of them across the U.S. The prayers of righteous men availeth much. That’s what sustains me. I’m sustained by the trust in God and the support of families, doctors and nurses alike. I'm motivated to live and would advise everybody to fight. You can’t fight lying down. You have to stand up, fight and have a positive attitude. That’s girl power!”

To purchase her book My Breast Cancer Story: The Anatomy of Tears, Click Here

Note: Every patient’s cancer and treatment is unique and results are not typical of every patient undergoing treatment.